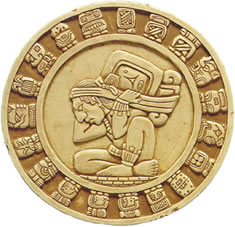 New Year's Day. National Holiday. Most businesses are closed today, but the festivities go on. On New Year's eve, many restaurants will offer a special meal, and the town will have a fireworks display after midnight. It's traditional to eat as many grapes as you can while the clock strikes the twelve last alarms of the night. This symbolized the good luck that this year will bring!

Dia de los Santos Reyes or Reyes Magos. This is the daywhenMexicans exchange Christmas presents in accordance with the arrival ofthethree gift bearing wisemen to Jesus Christ. According to them, the wise men took days to arrive in Bethlehem to give Jesus their gifts. This day ends the 'holidayseason'officially. On this day, there is a special bread that is baked with small dolls inside. As each piece is cut, guest know that the ones who find the small trinkets in their piece are responsible for hosting a party on Feb. 2, 2010. 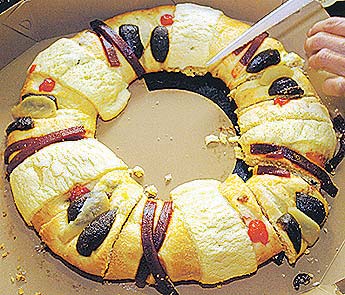 Cozumel is very proud of the large flag that we have waving our beachfront area.

Carnaval is an official Mexican holiday that kicks off a five-daycelebrationof the libido before the Catholic lent. Beginning the weekend beforeLent,Carnaval is celebrated exhubrantly with parades, floats and dancing inthestreets.There are a lot of local events that begin before the publiccelebrations are seen.  As soon as the Christmas festivities areover, the carnaval participants begin preparations.  The dancersbegin practicing their dances, the designers begin theircreations.
Cozumel isone of the top three celebrations for Carnaval in the world. There are many dances all over town and at the hotels, with parades atnight.  The best traditional foods are set up as restaurants allover the main square and everyone is in Carnaval.  The parade isusually best on the last night, which is Tuesday, Fat Tuesdaybefore lent. We recommend you enjoyo the delightful food stands set up downtown and around the palacio grounds. The celebrations bring famous singers, dancers and stars. It's a know fact that many stars can get out and about without being identified because everyone is dressed up. <

The biggest events are the parades which are Saturday, Sunday, andTuesday,before Ash Wednesday.   The parade begins at the south part oftownbehind the municiple building, goes down the beachfront 'Malicon' totheairport road, and then back.  Most  parades begin about 6:30andend about 9:00.  The last one  is usually the longest andbestas that is the float competition night. This is Cozumel's best celebration and takes many weeks of preparations.

Valentine's Day is celebrated as "El Dia de laAmistad"which is Day of Friendship.  The lovers celebrate this day as doneighbors,friends, teachers, parents, etc.  It is totally proper to giveflowers,chocolates and cards or take someone out for dinner that you are closeto,even if not romantically.

Flag Day. Official speeches and ceremonies are conductednationwide on this holiday honoring the Mexican flag.  .

Benito Juarez's Birthday. Mexico observes a nationalholiday to honor one of the country's most beloved presidents andleader of the 19th century Reform movement.

Vernal Equinox. Visitors gather on the vernal and autumnalequinoxes at the main temple at Chichen Itza to witness the spectaculardescent of the plumed serpent, Kukulcan. The ancient Maya constructedthe pyramid-shaped temple on such a way that, during the equinox, abeam of sunlight creates a dramatic serpentine shadow that moves downthe steps towards the earth, like a real snake slithering down the faceof the temple. The twice-yearly occurrence is supposed to ensure a goodharvest.

Holy week and Easter.  "Semana Santa"During the daysleading up to and including Easter, Mexicans hold celebrations andsomberprocessions in observance of Christ's resurrection.  This is aholyweek that ends the 40-day Lent period. This week includes Good FridayandEaster Sunday. It is Mexican custom to break confetti-filled eggs overtheheads of friends and family.

Día del Niño. Children's day.  Parentsandschools prepare many surprises and presents for their kids.  Theyhaveparties, and go to events that Cozumel offers through out the town.  If you make friends with families that have children, you will berewardedwith big smiles if you think to bring them a treat on this day.

Primero de Mayo is the Mexican national holiday that is equivalentto the U.S. Labor Day.

This historic festival is held in the small town of El Cedral, in the south of Cozumel Island at the end of April. This annual event is said to have been started over 150 years ago by Casimiro Cárdenas.Cárdenas was one of a group that fled to the island from the village of Saban, on the mainland, after an attack during the War of the Castes. The attackers killed many other villagers, but Cárdenas survived whilst clutching a small wooden cross.Legend has it that Cárdenas vowed to start an annual festival wherever he settled, to honor the religious power of this crucifix. Today, the original Holy Cross Festival forms part of the wider Festival of El Cedral, which includes fairs, traditional feasts, rodeos, bullfights, music and competitions. The celebrations last about 5 days in all and are held every year at the end of April or beginning of MayLa Feria de Cedral" is a popular event for the locals. It is a fair type event that includes an array of traditional Mexican/Yucatecan dishes and crafts. They exhibit live stock, as the US fairs do, and have rides set up as well. There are also bull fights, and they eat the bull afterwards. If you have never seen a bull fight, it is hard to watch. The fight is bloody and not suited for children.

Cinco de Mayo. This national holiday commemorates Mexico's1862 defeat of the French in the Battle of Puebla. Many Americans celebrate it thinking it's equal to the United State's 4th of July celebration. It is not the major holiday in Mexico.

Mother's Day.  Due to the importance of the mother inMexican culture, Mother's Day is an especially significant holiday. Thereare many programs at schools, and moms get flowers at restaurants andstores.

This local event brings visitors from all over the world. The First Place winner goes home with a brand new car! . 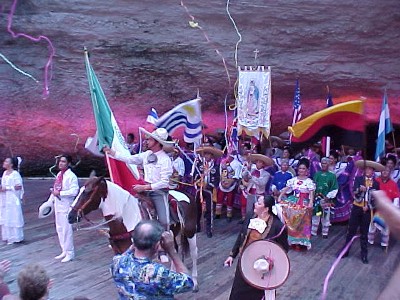 Autumnal Equinox. The shadow pattern of the plumed serpentKukulcan descends the main pyramid of Chichen Itza, just as it does inthe vernal equinox. 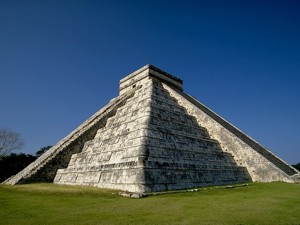 Dia de San Miguel. The patron saint of the town of San Miguel is The Archangel San Miguel. Every year from Sept. 21-25,there are fireworks, and Naval processioin in the town square in front of the pier.
About 90 years ago, a group of workers digging in an area north of town unearthed a statue of the archangel St Michael carved from ivory, brandishing a sword of pure gold and wearing a gold crown. This event occurred on a day holy to San Miguel — September 29. To the locals, this coincidence was too great to dismiss as less than a miracle, and thus the town was renamed. The statue is believed to have been a gift from Juan de Grijalva as part of an attempt to introduce Christianity to the island. The original statue was sent to Merida to be restored. Some say that the real statue never returned, and that the one on display is an exact replica rather than the original, but this has never been proven.
Today, the locals wish for safety from hurricanes, a good tourist season, fruitful fishing season, and God's blessing.

Day of the Dead, or All Souls' Day. "Dia de los Muertos".This Mexican holiday merges Pre-Columbian beliefs and modernCatholocism.Europe's All Saints' Day and the Aztec worship of the dead contributetothese two days that honor Mexico's dead.
Deceased friends, relatives, and ancestors are remembered and honoredina traditional Mexican celebration that includes graveside picnics,skeleton-shapedcandy and dolls, and a party-like atmosphere. It was traditionallybelievedthat the spirits of the dead return to earth on this day.

Day of the Virgin of Guadalupe is celebrated with a feast honoringMexico's patron saint.

Las Posadas celebrates Joseph and Mary's search for shelter inBethlehem with candlelight processions that end at various nativityscenes.  These continue through Jan. 6.